Need something to cheer you up or serve as a study break? This guide will give you a laugh! It's also good for any research you're doing that involves humor.

This is not a list of personal favorites. It is an average of 17 different published "Funniest Movies" lists.

Comedy film is a genre of film in which the main emphasis is on humour. These films are designed to elicit laughter from the audience. Comedies are generally light-hearted dramas and are made to amuse and entertain the audiences. The comedy genre often humorously exaggerates situations, ways of speaking, or the action and characters.

Another way to laugh at movies is to laugh AT movies! Riffing can be done by yourself, with a group, or by watching others do it.

A couple of excellent examples are:

See my B Movies LibGuide for more.

THE FUNNIEST MOVIE EVER

Scientific research has proven which movie is the funniest of all time.

Airplane! generates an average of THREE laughs per minute! 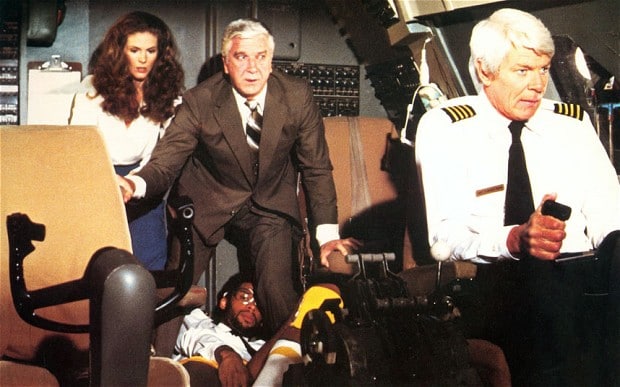 I searched far and wide for lists of funniest movies of all time. Criteria included the movies being ranked, not just listed, and the lists created by groups, not individuals. Some lists were made by groups of comedians or film reviewers, others were based on general public voting (like Ranker.com). I ended up including both “funniest movies” lists and “best comedies” lists, even though there’s technically a difference. I figured the blend of the two would produce the best results.

I was able to find 27 lists. Some of the lists I used in 2017 had been updated, so that helped make this collection as current and as thorough as possible.

I took the 27 lists and added all their content into a spreadsheet, noting the rank of every film. The total number was almost 2,400 including all the repeats, with Airplane! being on 26 of the 27 lists. I experimented with different formulas, trying to balance the value of being ranked high on any list and being included on the most lists. I ended up averaging the rankings each movie got (there were 354 that were on at least 2 lists) and dividing that average by the number of lists that movie was on. The lowest score meant a high ranking average on many lists.

The movies that were on the most lists (out of 27):

Here are links to the lists I used along with dates the lists were created:

Sources were selected based on numbers of people contributing and variety of perspectives.

Factors in the ranking include how many lists the movie was on and each movie's average ranking. Attached is the Excel spreadsheet with the raw data and the full list with scores.

The Top 300 Funniest Movies of All Time

This is my OFFICIAL DEFINITIVE LIST of the funniest movies ever made (as of 2020). See below for the research process that was used in making the list, including the 27 lists that were averaged.