Altmetrics are "tools measuring scholarly impact in an online environment."

Altmetric aggregators are useful because they collect statistics about the use of a research product from a variety of sources, such as Mendeley, Twitter, Facebook, blogs, scholarly bookmarking sites, and more.

Altmetric
"Altmetric collects the relevant discussions around each article from Twitter, Facebook, science blogs, mainstream news outlets, YouTube and many more sources - then makes it all available to you in one place. . . Each article is given a score that measures the quantity and quality of attention it has received."  (Description from website). While there is a charge to subscribe to this service, Altmetric offers researchers a free bookmarklet they can use in Firefox, Chrome and Safari to view metrics for articles they find on the web (including their own!). Not all articles will have Altmetrics.

Impactstory
"Impactstory is an open-source, web-based tool that helps researchers explore and share the diverse impacts of all their research products—from traditional ones like journal articles, to emerging products like blog posts, datasets, and software." (Description from website). ImpactStory draws statistics from sources such as Twitter, CiteULike, PubMed, Scopus, Mendeley, Dryad, Slideshare, and more. Create your own profile, listing your research articles and other "products" (datasets, slides, etc.), and Impact Story will generate a report that shows the use and influence of your research.

PLoS Impact Explorer
"This page mashes up alt-metrics data from Altmetric with articles from thePublic Library of Science (PLoS). Check which articles are seeing the most buzz from social media sites, newspapers and in online reference managers." (Description from website)

An increasing number of researchers are using altmetrics to help document the varied impacts of their work in their CVs, tenure & promotion dossiers, and grant and job applications.

TIP: When using altmetrics to document your impact, keep in mind that context is very important for making the numbers you list meaningful. So, rather than include raw counts of your article's metrics:

...you should provide contextual information that communicates to your viewer how your paper or other research output has performed relative to others' papers/outputs:

TIP: Qualitative data is also a good way to provide context for the attention your work has received. You can find full-text mentions of your work using altmetrics services, and include them in your website, CV, or dossier like so:

Author, A. (2015). "Title." Journal name. doi:10.000/10.100x
Paper covered by more than 100 media outlets worldwide, including The Wall Street Journal and The Guardian.
Recommended on 12 research blogs, putting it in the 99th percentile of Biology publications published in 2015. Was described as "a breakthrough study on examples" by prominent genetics and evolution researcher Rosie Redfield.

All three altmetrics services provide a means for embedding your altmetrics data into your personal website.

Altmetric.com: Altmetric offers cut-and-paste code that allows you to embed multiple item-level badges on your website. First, copy and paste the Altmetric.com javascript snippet into the HTML of your website. Then, find the DOI or other persistent identifier of the item you'd like to display a badge for and use it to build a badge for your website. Once you've finished building your badge, you can then copy and paste a simple snippet of HTML into your webpage where you want the badge to appear. For more information, seethe embedding instructions on the Altmetric.com website.

PlumX: PlumX also provides cut-and-paste code that allows you to embed both item- and researcher-level widgets on your website. On the author or item page, you'll see an "Embed Widget" button in the upper-right hand corner of the screen. Click on the button and, on the next page, choose what you want to appear on your widget. Then, at the bottom of the page, copy the code from the "Code Snippets" section and paste it into your website where you want the widget to appear.

Impactstory: You can use cut-and-paste code to embed a badge and link to your Impactstory profile in your website. Or, you can use your profile's open data to embed the metrics themselves in your website. (This process is a bit more technical, but allows for a lot of customization.) You can add your profile- or item-level JSON data files to your website, using your favorite language to parse the code into XML or HTML. See this tutorial for more information on how to do that. 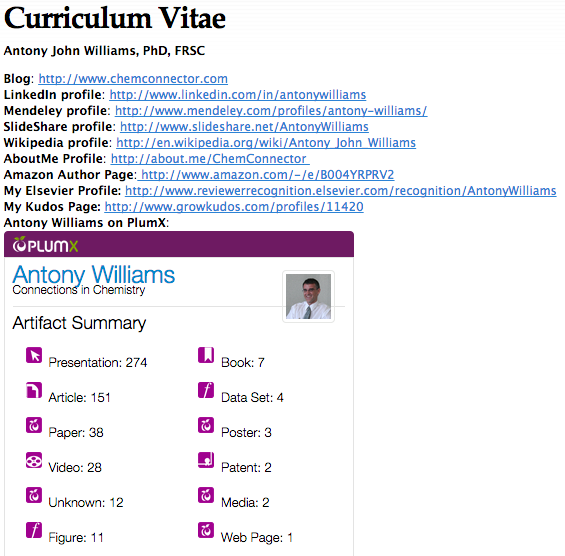 Using altmetrics in your own promotion & tenure portfolio

If you do choose to use altmetrics in your portfolio, keep in mind that it's best to be selective with the metrics you plan to include. It's much more effective to include metrics that showcase the types of impact you're looking to document, rather than taking a "kitchen sink" approach (which might overwhelm your reviewers with numbers).

For example, if you're looking to document your public outreach & engagement initatives, you can include how often your work has been mentioned in the press and on Twitter, the pageview statistics for your lab's blog, and the citations your articles have received on Wikipedia. If you want to document the scholarly impacts of your work, you can include the number of citations you've received, how often your work is bookmarked on Mendeley (and by what demographics), reviews of your work on Faculty of 1000, and so on.

Promotion & tenure preparation guidelines rarely include instructions on how to use impact metrics. Or, when they do, the guidelines usually only address citation metrics or recommend using journal impact factors.

These instructions often also lack guidance on how to make the metrics meaningful. For example, what does it mean if a tenure candidate says he received 5 citations for a paper published in 2013? Whether that's a good or bad number is often dependent upon the average citations that others in his field receive, and also the year the paper was published (as older papers tend to have more citations, by virtue of just being around longer).

There's an obvious need for clear and objective instructions on how to use impact metrics in tenure & promotion portfolios. And there's also a need for guidelines to help portfolio reviewers make sense of the numbers.

A small but growing number of universities include altmetrics in their tenure & promotion preparation guidelines. These include the University of Colorado Denver Medical School (PDF; page 84) and IUPUI (see: "The Guidelines for Preparing and Reviewing Promotion and Tenure Dossiers").

If you're interested in updating your university promotion & tenure guidelines to better document the use and interpretation of impact metrics, contact your faculty senate (or similar organization) to learn more about how that might work on your campus. You might also get in touch with your Vice Provost for Faculty & Academic Affairs (or similar campus office that oversees the writing of such guidelines).