The Map Room is located in the basement of Murphy Library, Room 17.  The Map Room integrates materials collected by the Geography and Earth Science Department over many years with materials received at UWL through the Federal Depository Library Program (FDLP) from 1982-2008.  Over 40,000 topographic maps are held, along with planimetric maps, geologic maps, image maps, and geologic and topographic atlases.  In addition, there is a small quantity of global maps, historic maps (1890's to 1917), and maps of the solar system.  There are also Antarctic photo maps, and Antarctic Satellite Image Maps.

Map Room FDLP maps received since 2004 are listed in the Library Catalog (Search@UW).  Maps may be found in Search@UW using the search terms 7.5 minute series (topographic maps), map scale (such as 1:24,000), or series number (if known).

Map room materials may be checked out for the same length of time as regular books.

How to use the map room

Using the drawing of the map room provided on this lib guide that outlines and displays where certain maps and sizes are located in the room, choose the particular state or kind of map you want.   The quads of the states in the 1:24,000 scale are shelved by state and map name.

Place your maps you are studying on the top large flat parts of the filing cabinets.  Please do not refile them, but place in the designated area for someone else to put back.

Due to the flooding event of August 2021, the basement of Murphy Library is currently closed.

We currently estimate that the government documents collections will become available again around September 2023, when repairs to the basement are estimated to be completed.

Located in the library's basement, this is the outside of the map room, Room Number 17: 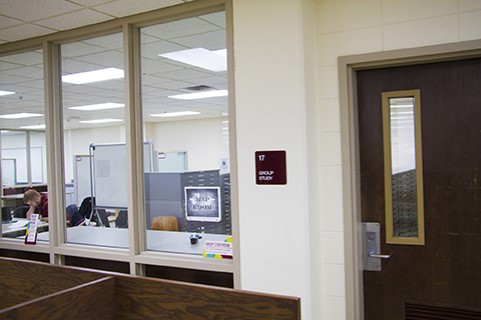 Direction and layout:  Click on the floor map below for a larger version.  The front door of the map room is facing north.  Go directly south to access the map cabinets on the opposite wall.

Find maps in the Library Catalog

Here is what the description for a 7.5 series topographic map of Alaska looks like in Search@UW:  (note the holdings statement in italics; that is what the location of the maps in the basement would look like).

Bathymetric - topographic maps of the ocean or sea floor.

Investigative maps - multicolor maps of diverse topical material like bedrock, geology, marine geology, mineral and energy resources, geophysics, and geochemistry.  Also includes the solar system.  Each map is folded and placed in a paper jacket in those tall filing cabinets.

Latitude, Longitude - these are in degrees-minutes-seconds format, then they are converted to decimal-minutes. (See definition for minutes).

Orthophoto:  an ariel photograph or image geometrically corrected so the scale is uniform, and it is in 7.5 minute quad format.  Orthophotomaps can be topographic, bathymetric, black & white, and quads.

Scale (or map scale) - the relationship between the distance shown on the map and the actual distance.  Scales vary from 1:24,000 to 1:250,000, and covers areas ranging from the entire earth to a city block or less.

Topographic - detailed graphic representations of features appearing on the Earth's surface, called land contours, plus streams or other bodies of water, forest cover, built-up areas, or individual buildings, and other points of interest.